We are pleased to announce that we have started cooperation with CEVT on improving electric vehicle transmissions within the Swedish FFI framework. In this program, ANS will help CEVT to increase efficiency and drive range by applying the new Triboconditioning® CG treatment on gears in order to minimize friction losses as well as maximizing wear resistance. Further, the Triboconditioning® CG treatment also aims at improving the vehicle’s NVH characteristics by reducing annoying noise coming out of the gearbox. The BEV drivers will thus enjoy a nice and silent ride. In support of its offering for friction reduction and wear resistant surface treatment technologies including Triboconditioning®, Triboconditioning® CG, TriboNite® and Tricolit®, ANS is pleased to announce that Mr David Chobany has been appointed to the position of Technology and Sales Director for the Americas.

Mr. Chobany has over 25 years of substantial hands-on experience and expertise in advanced precision bore finishing and honing technologies designed to produce technical/functional surface structuring and bore geometry/size control. He is a subject matter expert in machining processes relating to precision surface structuring and has authored many technical articles including topics such as, flexible/agile bore finishing on CNC platforms, and engine cylinder bore perfection. As a Senior Member of the SME (Society of Manufacturing Engineers) Mr. Chobany has presented to many of the world’s leading technical organizations including SME, IMTS, SAE, PMTS and STLE.

He has worked within the global OE and Tier 1 network supporting machining advances in the engine/powertrain, gear, hydraulics, aerospace and energy sectors, among others.  Past experiences include Business Development Manager for Sunnen Products Company, Vice President of Bates Technologies (formerly Micromatic Textron), Deputy CEO of EFI (a critical health and safety composites manufacturer), and Director of Engineered Products for a large electrical distribution agency.

Mr. Chobany will lead the company’s efforts to commercialize ongoing projects, create new business opportunities and establish strategic and developmental partnerships within the Americas region. Offices to support these efforts are strategically located in the Midwest region of the USA.  To learn more of these efforts please contact David Chobany.

Technology and sales Director for the Americas

The new variant of Triboconditioning®, which has been developed by ANS for the treatment of complex geometries, gains attention in one of the most renowned engineering magazines in Germany, the MTZ – Motortechnische Zeitschrift / Magazine for Engine Technology. It highlights the achievable features like plateau-like surface profile and residual stress together with the proprietary application of reactive fluids, for improved performance of parts like gears in terms of friction, wear and load bearing capability. Applied Nano Surfaces (ANS), a specialist in surface optimization, has developed a process to optimize wear and service life of engine components. In addition, reduced friction of the drive components in passenger car engines can even result in fuel savings of up to four percent. The tribo-conditioning process for friction optimization significantly improves the properties of the component in terms of wear resistance and boundary friction. So that the automotive industry can continue to comply with ever stricter legal standards in the future. In addition, lower wear means a significantly longer service life.

Triboconditioning is a mechanical-chemical surface refinement process for optimizing the friction properties of mechanical components made of steel or cast iron. The process combines the polishing of the component surface with the formation of a solid lubricant film (tribofilm), which is chemically bound to the surface of the component. This improves in particular the running-in behaviour of treated components, which is of great importance as better run-in engine parts remain in good condition over a much longer period of time.

When an engine is run in optimally, surface irregularities of the individual components are smoothed out and local pressures between the individual friction parts are reduced. This then favors full-film lubrication, which leads to dramatically less wear and lower fuel consumption. The patented ANS triboconditioning of engine parts improves this contact conformity. This is because the component surface is quickly damaged by microcracks and chipping, especially during running-in, which can lead to premature failure of the parts. The more advantageous surface increases the lubricating film strength, which in turn enables automobile manufacturers to use modern energy-saving lubricants. Triboconditioning alone has the potential to improve fuel consumption in modern engines by about one percent. In combination with low-viscosity engine oils, however, car manufacturers can even achieve fuel savings of two to four percent.

Triboconditioning for cams and bearings of camshafts and crankshaft bearings: inexpensive and less complex

The triboconditioning of camshafts reduces friction and thus wear in the valve train. The specialists at ANS were able to measure the greatest advantages for direct-acting mechanical bucket (DAMB) valve trains in high-emission stop-and-go city traffic. The effect of ANS triboconditioning can be attributed primarily to the optimized surface topography. In addition, the tribological layer prevents the oil film from tearing off at low speeds, which prevents wear on cams and bearings.

Modern automatic start/stop systems and engine oils with an extremely low viscosity in particular tend to stress the camshaft bearings to their limits, leading to premature wear. Many car manufacturers therefore use electric oil pumps that reduce the risk of oil film breakage but cannot completely eliminate it. Compared to electric pumps, triboconditioning of camshaft bearings is the much more cost-effective and significantly less complex solution.

Due to the use of start-stop technologies and low-viscosity oils, crankshaft bearings also have an increasing need to optimize tribological behavior. This is because repeated starting and stopping of the engine increases friction losses enormously and exposes the bearings to a significantly higher surface load. This has made it necessary to use increasingly advanced and expensive materials. This increases production costs and can cause unwanted noise levels in the engine. Similar to camshafts, the ANS triboconditioning helps to increase the lubricating film strength on the crankshaft bearings, to minimize the starting friction and the bearing abrasion on the mating surface of the crankshaft journals.

The technical potential of triboconditioning has been proven by intensive tests. These tests took place for five years at several research and technology centers for a wide variety of engine components such as valves, connecting rods and cylinder bores, both for passenger cars and commercial vehicles. Among others at the car manufacturer Ford.

The measurable optimisation can be attributed to three main factors: the formation of a self-regenerating tribological film, the improvement of surface integrity after running-in and a modified surface roughness profile.

Applied Nano Surfaces (ANS) offers solutions for friction and wear reduction for industry and especially the automotive sector. The uniqueness of the ANS technology is the optimization of all treated components using a technology that can be easily and cost-effectively implemented into existing production processes. For lower friction and increased wear resistance!

One of Europe’s best Hightech Startups

ANS are proud to have been chosen one of the 40 best European Hightech Startups at the #HTVD19. Come to Dresden, visit the High Tech Venture days on November 15 to 16 and listen to our CEO, Christian Kolar, presenting ANS and our unique solutions for friction and wear reduction.

Visit us in the Sunnen stand at the EMO fair in Hannover in hall 011, stand D02. We will showcase our latest developments within our technology Triboconditioning® for friction and wear reduction. Come and talk with us to learn more about our technologies and our collaboration together with Sunnen.

Sunnen Products Company and ANS have a joint development program focused on ANS Triboconditioning® process that reduces friction and wear on a variety of honed parts and components.

To read more about the fair press the link below:

The ANS product Triboconditioning® has received funding from the European Union’s Horizon 2020 Research & Innovation programme under Grant Agreement no. 823307. Our website reflects only the authors’ views and the European Union is not liable for any use that may be made of the information contained therein. 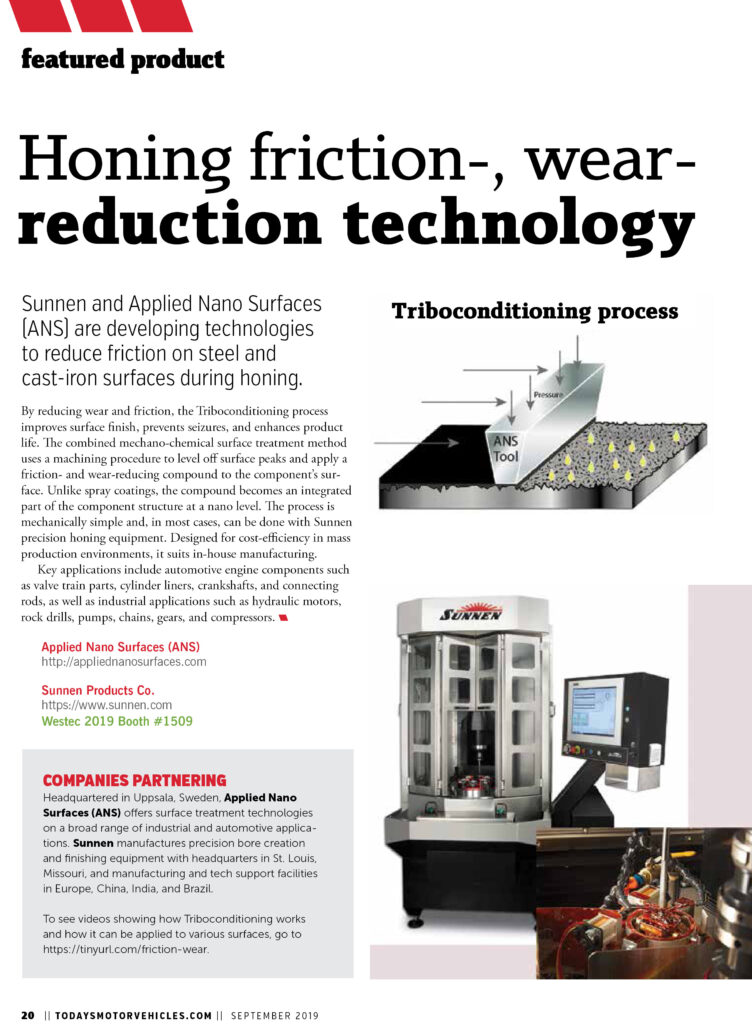 Sunnen and ANS collaborate on friction and wear reduction technology

“ANS is on the leading edge of friction reduction technology,” said Chris Miltenberger, President and CEO of Sunnen Products Company. “We are excited about working with ANS on the development of new products and surface finishing methods which will bring unique solutions to all segments of the manufacturing industry.

Triboconditioning® is a combined mechano-chemical surface treatment process which uses a machining procedure to level off surface peaks and apply a friction- and wear-reducing compound to the component surface. Unlike spray coatings, the compound becomes an integrated part of the component structure at a nano level. The process is mechanically simple and, in most cases, can be done with Sunnen precision honing equipment. It is very cost-efficient in mass production environments, making it perfect for in-house manufacturing as a part of component manufacturers’ production lines.

ANS is looking forward to combining our knowledge of friction reducing technology with Sunnen’s expertise in surface finishing,” said Christian Kolar, CEO, Applied Nano Surfaces Sweden AB.  “The solutions under development have the potential to be a real game-changer in component efficiency and product lifetime.”

Sunnen is a worldwide leader in the manufacture of precision bore creation and finishing equipment with headquarters in St. Louis, Missouri, and manufacturing and tech support facilities in Europe, China, India and Brazil.

We have now realized the Triboconditioning® treatment on gears

After intense development work we have finally launched a new treatment system for gears based on our award winning mechano-chemical surface finishing process Triboconditioning®. This opens up a whole range of new applications where we can help reduce friction, wear as well as minimize annoying noise emissions. With our treatment we can combine an optimized surface chemistry with an improved surface finish, also adding compressive stresses for increased durability. Don’t hesitate to contact us to learn more!

Great days at the Hannover Messe!

The big happening of the year, the Hannover Messe, is over. We at Applied Nano Surfaces had a fun and exciting week where we had the opportunity to welcome both old and new friends  to our booth. We are pleased by the great response we recieved and would like to thank everyone who came to visit our stand making the exhibiton a success.

Welcome to learn more about us at http://appliednanosurfaces.com/